Last week I travelled to Singapore for Gameface Media to shoot the next round of the JP Morgan Corporate Challenge, a 5.6km race with over 14,000 runners competing. Here is what happened…

Travelling to and in Singapore

I flew out from London Heathrow with Qatar Airways and had a six hour flight ahead of me. I landed in Doha, Qatar 6 hours later and had some time to explore the airport and get something to eat whilst watching the sunset over the desert, which was pretty cool! I then caught my next flight from Doha to Singapore which was about another 6 hour flight. Both flights were comfortable and having two shorter flights instead of one long flight wasn’t bad at all, it meant I could take my time and stretch my legs in between flights.

Once I arrived into Singapore everything went pretty smoothly, got through passport control and my bag was already waiting to be collected which is always a bonus. So the next thing was tackling the MRT which is Singapore’s version of the London Underground or Metro System. I had read about a thing called the Tourist Pass which allows you unlimited travel on the trains and busses around Singapore for a set number of days; my plan was to buy this 3 day pass and travel around as much as I could in the short time I had, it was also cheaper to buy the pass than to get a taxi to and from the airport! So I walked through the airport following the signs to the MRT and found the ticket desk, after enquiring about the 3 day pass the woman told me they had run out and I could buy the pass from any station so just buy a single to the next stop and buy one there. So I did this, but upon arriving at the next station and speaking to the ticket man he went on to tell me how you can’t buy this pass at every station and only at certain stations so he said just go through and get off at City Hall which is where I was going and buy one there. He also said it did not matter that I did not have a ticket for the full journey! He was right when I arrived at City Hall I spoke to the ticket staff and explained the situation and they let me through to purchase the tourist pass, I ended up only buying the 2 day pass because when I thought about it, my last day was dedicated to just getting work done, so I would not have time to travel around and explore.

Once out of the MRT I was hit by the extreme heat instantly. It was a good thing I travelled in shorts and a t-shirt because if I didn’t I would have died of the heat instantly. I now had to find where my hotel was, I had no idea where it was in relation to me, I knew it was close but I did not know which direction to start walking! Luckily I had bought something called a World Sim which allows me to get very cheap rates for data so all I did was turn my data on my phone and fire up Google Maps which took me right to my hotel.

I was a bit early for check in so left my bags at the hotel and started exploring what was around me. I started off by just walking towards the waterfront area, following a couple of signs and then just making my own way, stopping along the way to take photos. I ended up walking right the way up to the F1 Pit area which is right next to the Singapore Flyer. This was where the JP Morgan Corporate Challenge would finish, so it was good to be able to walk around and get an idea of where everything was before I had to go up for work. I started walking back towards the hotel and stopped along the way to try a coconut ice-cream thing with these pink gooey balls. I can’t remember what they were called but I did not like them, the ice-cream was nice though! 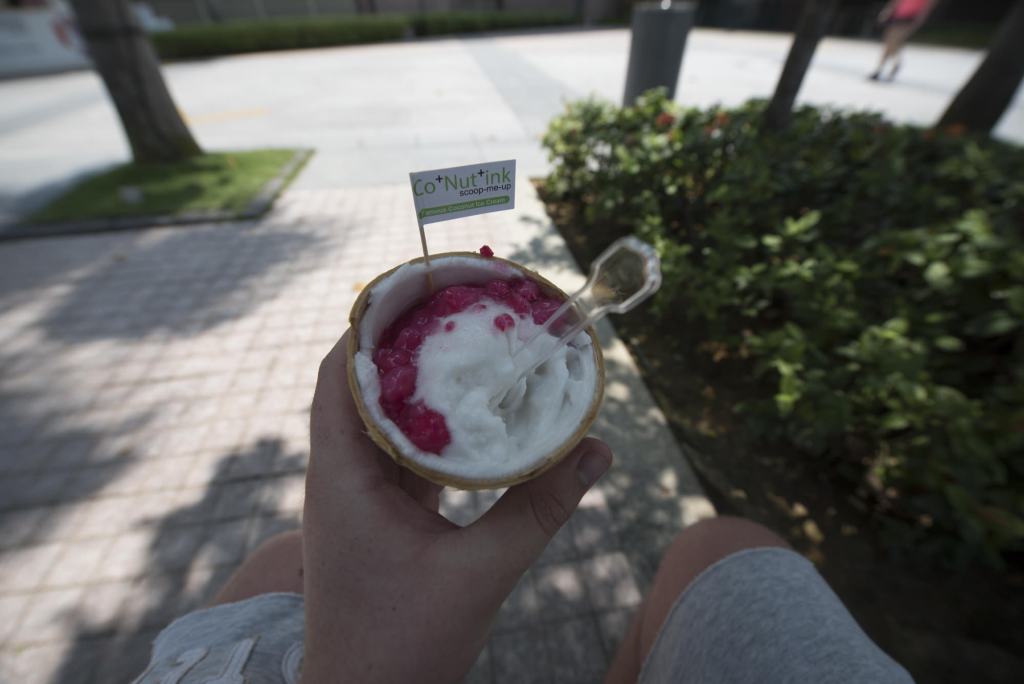 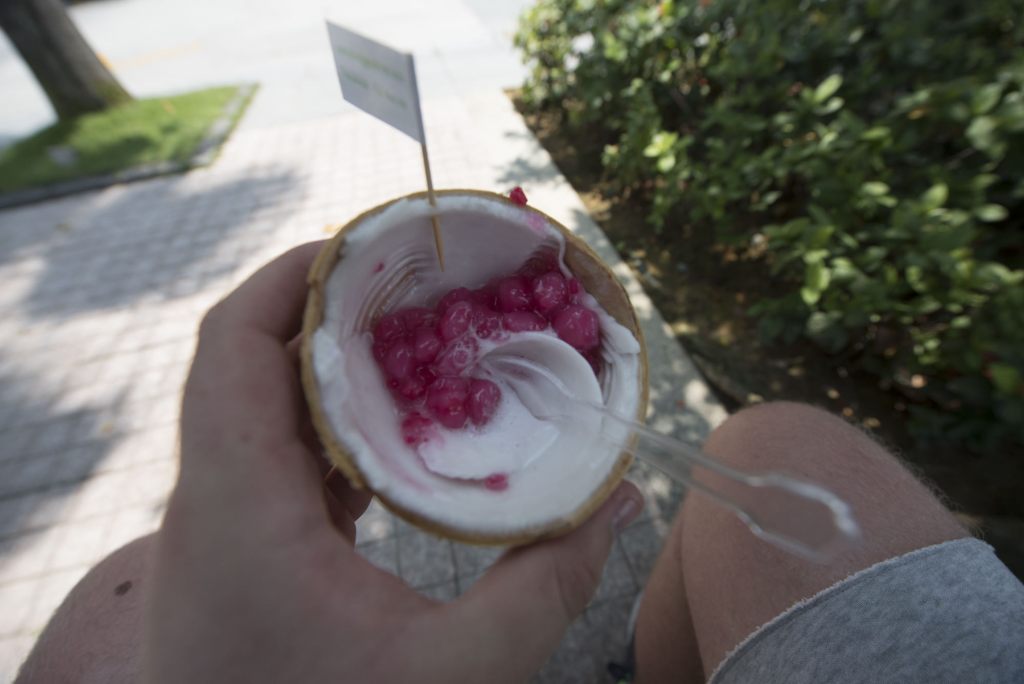 The food in Singapore

I knew before I arrived that Singapore had a very strong Chinese influence and Chinese food is one of my favourites so I was really excited to be able to try “real” Chinese, and Singapore did not disappoint! I ate a lot over the three days, wanting to try everything from their sweet and sour chicken to spicy noodles and duck 3 ways. If you like Chinese food Singapore is definitely a place worth visiting, the food is fresh and super tasty! Just be aware that the same dish can cost $6 in Chinatown and on the waterfront cost $15, don’t just stop and eat at the first restaurant or eating house you see, explore around and you might find something even better! Being close to the sea there is a lot of fish served, and it is as fresh as you can get… (It is still alive before you order). The restaurants keep an endless amount of crabs, lobster and fish in tanks outside the restaurant before serving them to you, so you couldn’t ask for the food to be any fresher!

On the two nights I was in Singapore not working I went up to Chinatown and explored and ate lots of food. I used the MRT to get me there and then walked back so I could see more of the city life in Singapore, this was a good choice as I was able to stop and take lots of photos along the way. Chinatown has a lot going on, an entire food area with all sorts being served. There are little market stalls and shops selling weird and wonderful things ranging from Chinese dressing gowns to chopsticks. I bought some chopsticks from a shop that just sold hundreds of them! 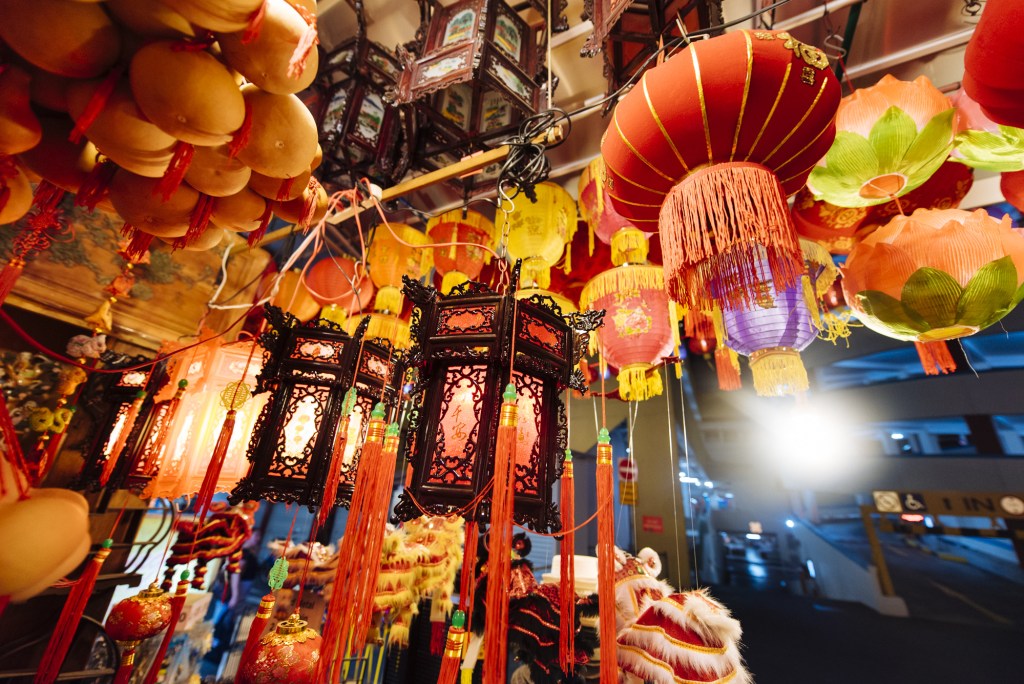 Gardens by the Bay

On my second day in Singapore I had most of the day free, with a meeting only at 4pm. So I took a very long walk to Gardens by the Bay, at this point I did not realise I could have taken the MRT, but I am glad I did walk because I got a lot of photos along the way. Gardens by the Bay are 2 huge greenhouses in one is a tropical climate with rainforest and a waterfall and in the other is gardens from around the world including South Africa, outside the greenhouses there are paths to explore the outside gardens and the rivers running through the area. 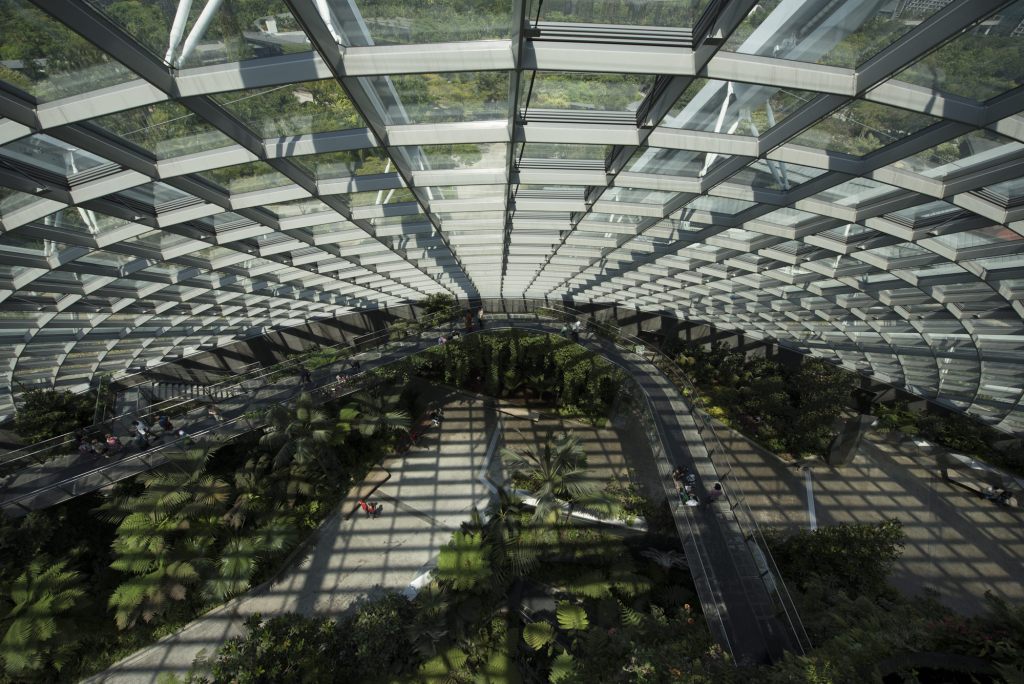 This was a really cool place and I spent a long time in there taking photos and walking around the different areas. The rainforest greenhouse has walkways from the roof all the way back down to the ground, you really get a unique perspective as you immerse yourself in this manmade tropical rainforest.  After exploring this area I went through to the Marina bay Sands hotel which is an incredibly expensive hotel with a viewing platform at the top, it is the one with the three towers that can be seen in many shots of Singapore. I explored the area and went into the shopping centre before taking the MRT back to the hotel for a well needed swim to cool down! 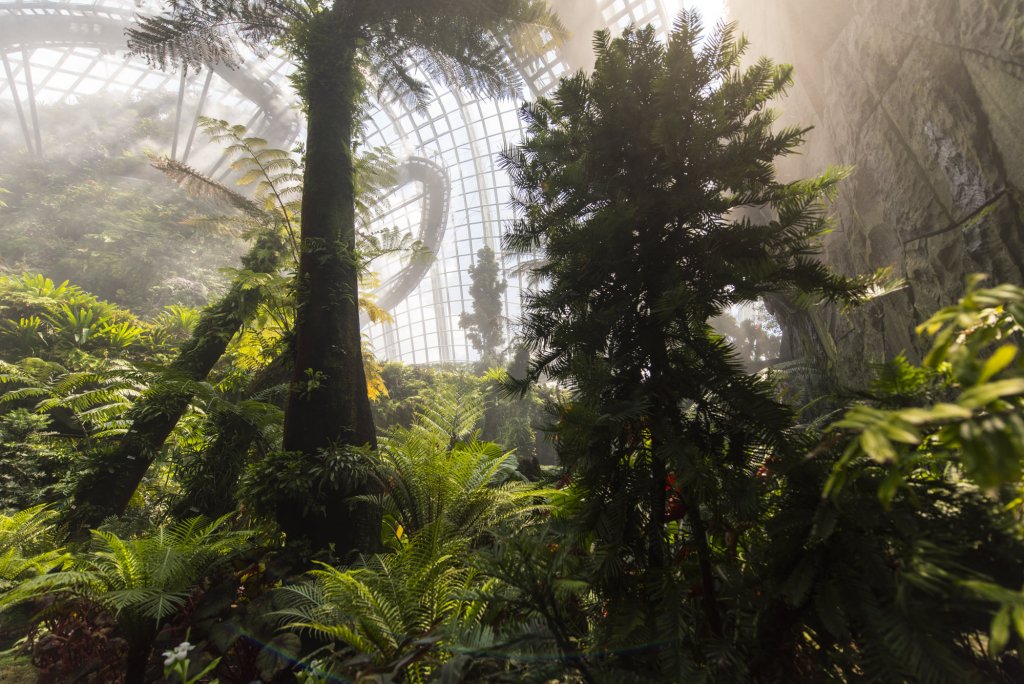 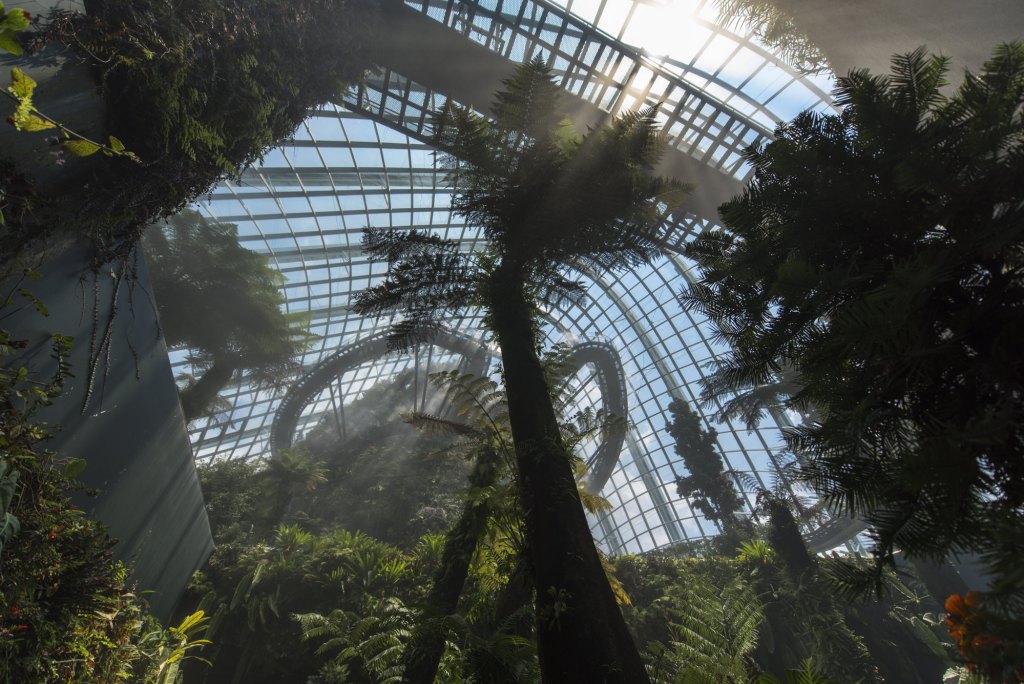 Day three and it was time to get down to work. I had the morning to relax by the pool and catch some sun before getting the MRT to the F1 Pit area. This was our main base and the base of operations for the JP Morgan team. I setup all of my kit and got a few pre race shots before the rest of the team course shooters arrived. After sorting them out with all the information they needed I did not have long to get to the start line meaning I had to run with all my kit, light stands and backpack in the heat of Singapore 34 degrees celsius and extremely humid. I made it to the start line with a few minutes to spare and enough time to get the start line shots with the city skyline in the background. Once the race started I worked my way along the course getting as many different shots as I could along the way, which often proves difficult because you can’t get a clean shot when there is over 14,000 runners all competing! Once I had finished walking along the course I spent some time around the finish area getting some shots there before the end of the race. All that was left now was to edit the photos and get to the airport ready to fly to Norway for Viking Race with Epic Action Imagery. Singapore airport is well equipped to work with free wifi and charging stations and comfortable seating all around the airport, so I was able to get some food and start editing the promotional images ready to send when I got to Norway. Below are some highlight images from the shoot and a video round up of my time in Singapore. 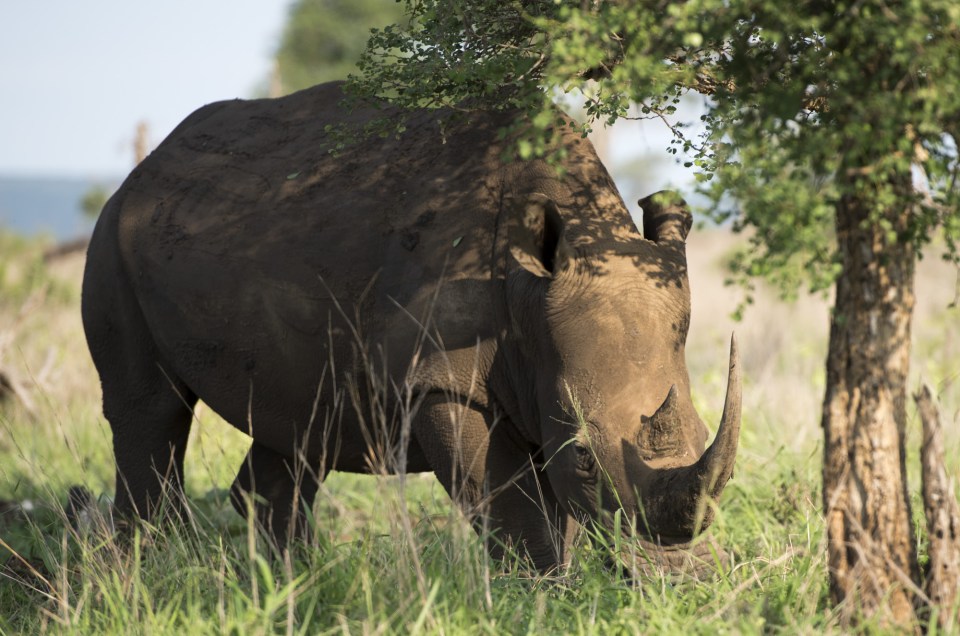 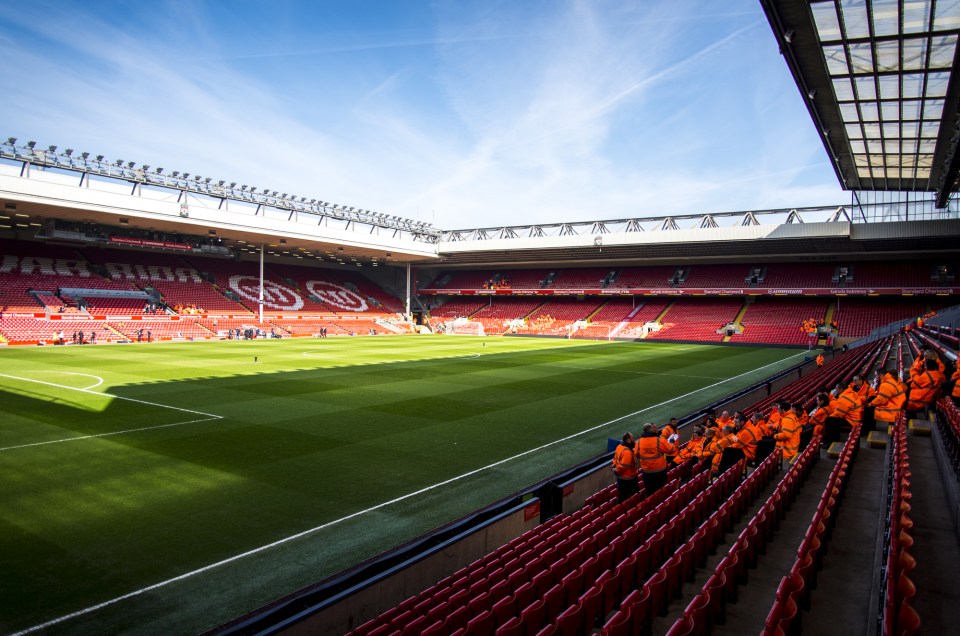