Pinhole Bullet Time Behind The Scenes

June 10, 2014 In Behind The Scenes Pinhole Project

There was so much that went into my pinhole bullet time project that I had to create a behind the scenes video to show everyone exactly what happened and how it all came together.

I have split the project up by numbers.

The entire project was based around looking at different ways t capture sports action images. I wanted to combine traditional photographic practices with modern technology. And so I did this through pinhole bullet time.

The way the exposure worked was difficult. I shot in a studio and the entire shoot was done in complete darkness. All of the light sources had to blacked out, this included little LED’s on smoke detectors! Because even though they are small they produce a lot of light. To get the images I used 6 Bowens 500R studio kits all set to maximum power, and because everything was shot in complete darkness the flash worked as the shutter. It was incredibly difficult to get the right timing with my model, because I could not see where he was during the action sequence. However a lot of practice with the lights on and remembering key timings meant that we got it right in the end.

After exposing onto the 35mm film it was removed from the pinhole rig and put straight into developing tanks ready to be developed. After developing, each individual frame had to be scanned in; this took forever! Once scanned the film in I was able to put a rough sequence together and even though I had labelled everything to ensure the film was all scanned in the correct order, there were some sections that ended up in the wrong places which created hours of headaches trying to sort it out. When you stare at the same sequence over and over again it is incredibly difficult to figure out what is wrong with it, you know there is something wrong but actually finding it and sorting it out proved very difficult.

As well as that I also had to line each frame up with the previous frame, because as you know pinhole is not perfect however it is the imperfections of pinhole photography that ultimately make it perfect. So in Photoshop I had files with hundreds of layers. This was the best way to get everything as close to perfect as possible, and get rid of extreme jumpiness in the sequence.

The film I used was Ilford HP5 Plus 400 ISO. I used a 400 ISO film because there is very little grain to it and I just really like the HP5 film, I have used it for a long time and will continue to as long as Ilford is around! I could have used a 3200 or even an 800 film but that would have increased the graininess of the final images and I had access to a lot of very powerful light, so why not use it!

This entire project was a massive success and I am incredibly happy with the final result. It was the perfect way to combine high tech ideas and sports photography with a low tech solution, that goes back to the beginning of photography. Thanks to everyone who helped me create this work!

Here is the BTS video from the pinhole bullet time project:

This was one of the trigger images from the shoot day. 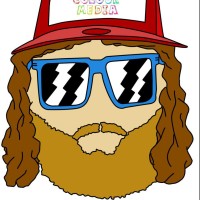 This Pinhole Photo Project Was Done in Bullet Time Reply

[…] To accomplish this, what Brandon did was visualized a fighter in the pinhole style. But in order to freeze the subject, he needed to add a ton of light. Seeing as many pinhole photos are shot at f167 and below, the only way that this could have been done with ISO 400 film would be to add a ton of light–specifically flash output. And so with that in mind, Brandon added loads and loads of high powered studio lights in addition to loads of setup. […]